Costa Cruises makes its return to the port of Genoa

Costa Cruises ships return to make regular calls in the port of Genoa. First ship to arrive today on the Andrea Doria Bridge, the Costa Fortuna displays 103,000 gross registered tons and can accommodate a total of 3,470 passengers. The ship will depart from Genoa every Friday, until November 8, and will offer one-week cruises in the Mediterranean Western.

The Costa ships will anchor 40 times in Genoa in 2019, including 34 stops made by the Costa Fortuna.
Three other vessels from the fleet will also call in the spring and fall, which should represent a movement of approximately 170,000 passengers.

Costa Cruises has already confirmed Genoa as port of call for 2020. The Costa Fortuna will be replaced by the Costa Pacifica (114,000 gross tons).
gross for a capacity of 3,780 passengers), which will make its inaugural stopover on March 23, 2020, and will return to in Genoa every Friday until 13 November 2020. Forty more stopovers will be planned, with a slight increase in the expected number of passengers, due to the use of a larger vessel.
This will be a real return to basics for Costa Fortuna and Costa Pacifica, since the ships were built at the Fincantieri shipyard in Sestri Ponente (Genoa) and launched in the same yard port.

Genoa will thus become a full-fledged home port for Costa Croisières’ fleet, which already plays a role.
in two other Ligurian ports. In total, the Costa Group will guarantee 243 stopovers in Liguria in 2019, representing a movement of approximately 1,200,000 passengers. 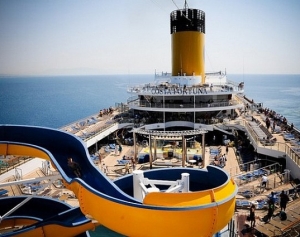