Yesterday Sri Lanka declared a state of emergency for 10 days to curb the clash of Buddhists and Muslims in the central Kandy district. Some Buddhist monks from Sri Lanka adhere to the theses of Burmese Buddhists. >.

These extremist monks are found mainly in Sri Lanka and Burma. Exactions against Muslim Rohingya in Burma demonstrate the violence of Buddhists and their followers.
In 2012, Sri Lankan monks create the Bodu Bala Sena (BBS) party, which develops violent and unclean sermons against Muslims and, to a lesser extent, Christians. That same year, in Burma, the monk Wirathu called for hatred against the Rohingya minority.

In 2014, Wirathu was welcomed in Colombo by Sri Lankan radical monks in triumph.

At least 11 shops and houses belonging to Muslims were reportedly destroyed after a Buddhist man was killed by a group of Muslims.

Lakshman Kiriella, a Member of Parliament for Kandy, told Parliament that the attacks were « carried out by outsiders/em> ». He would have added  »  I am ashamed as a Buddhist and we must apologize to Muslims/em> « . 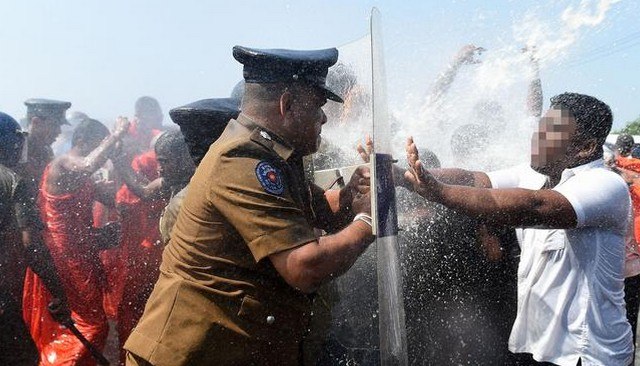 Some Buddhist nationalists have also protested against the presence in Sri Lanka of Rohingya Muslim asylum-seekers, mainly from Buddhist Myanmar. We cannot confirm this information, which would appear to be partisan.

At a special meeting, it was decided to declare a state of emergency for 10 days to prevent the spread of community riots in other parts of the country  « . It was also decided to take severe measures against those who incite violence through social networks. The government sent troops and elite police to Kandy.
Arrests were made and an investigation was opened into the conduct of police in Kandy, the last region to experience religious and ethnic conflicts.

In November 2017, there had been riots in the south

Last November, riots in the south of the island killed one person and damaged houses and vehicles. The Sinhalese are a predominantly Buddhist ethnic group representing almost three-quarters of Sri Lanka’s 21 million people. Muslims represent only 10% of the population.