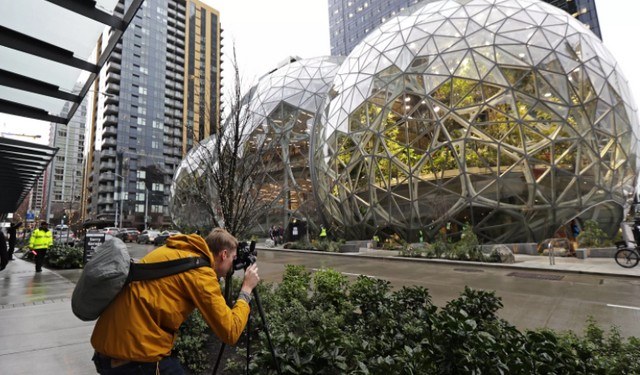 « In The Spheres – the new structures of the Amazon campus in downtown Seattle, no confined work spaces, meeting rooms or offices. The employees can meet there in huts suspended under trees a dozen meters high, or walk on paths along waterfalls. »

This is how the web giant describes its new urban oasis, symbol of the architectural revival that now animates the city center of the Emerald City where it employs nearly 40,000 people. 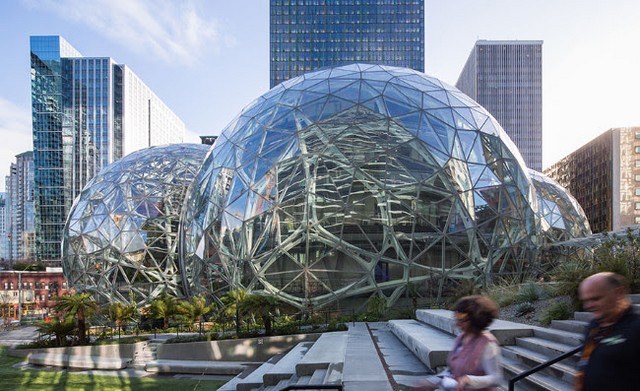 « Seattle is leading the way with urban projects like The Spheres, » said Seattle Mayor Jenny Durkan. This unique place will bring students, visitors and locals together in the heart of our city. »

Signed by the NBBJ architectural studio, the three « biospheres » measure from 24 to 29 metres in height, their domes consisting of 2,643 glass panels. They house a total of several tens of thousands of plants of 400 species: about fifty countries of the world are represented under this greenhouse 2.0 which should delight both biology and architecture enthusiasts.

Visitors can also admire a rose garden, plant walls, and many species of fish and insects.

For the record, the tallest tree under the bubble dome is a Port Jackson Fig tree (Ficus rubiginosa) nicknamed « Rubi » – planted in California in 1969 and nearly 17 metres tall, it was towed along the Pacific coast to Seattle last summer.

Greenhouse 2.0 will also welcome the brand new address of renowned chef Renee Erickson. The latter is already at the head of the Sea Creatures group, bringing together seven restaurants in the Emerald City. Further proof that Seattle is an expert when it comes to combining innovation and gastronomy.

Although reserved for Amazon Group employees, The Spheres are partially accessible to the public. An exhibition space called « The Understory » is accessible all year round, by reservation, on the ground floor of the structure : the group promises a « fully immersive, 360-degree experience, where visitors can learn more about the science, technology and plants that adorn The Spheres.

This self-guided tour of 20 to 40 minutes, similar to an exhibition, does not allow access to all the gardens of the Spheres. For this, it is best to book a guided tour of Amazon’s headquarters in downtown Seattle.

Guided tours of this « urban campus » are offered every Wednesday: for 90 minutes, they allow the curious to discover the Doppler Tower, which houses 4,000 Amazon employees, the Day 1 Tower, site of the first prototype of the Amazon Go cashless store, and of course The Spheres.