Algeria, behind the victory

Algeria dominated Senegal yesterday Friday and won the second CAN in its history. Algeria won the African Cup of Nations by defeating Senegal 1-0 on Friday in Cairo. She won her second CAN, after the one she won at home in 1990.

An opening of the score after 79 seconds

The Greens opened the scoring after 79 seconds thanks to Baghdad Bounedjah, whose faraway attempt, totally diverted by a shinbone of the Teranga Salif Sané Lions defender, lobbed the Senegalese keeper. 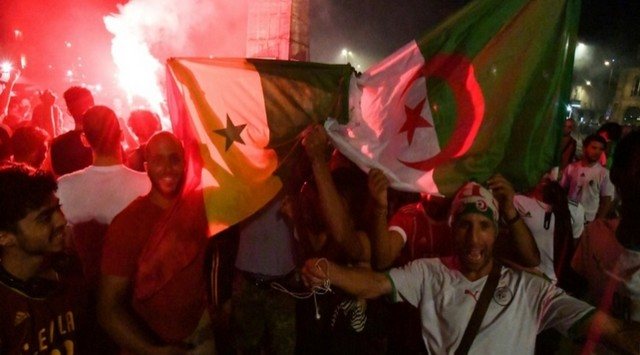 Senegal, a finalist in 2002, is still chasing a first title in the competition.

In Paris, at around 1am, a few overflows broke out in the streets adjacent to the Champs-Élysées. Groups provoked the police by firing fireworks, firecrackers, projectiles such as glass bottles and stones. In response, the police used tear gas. However, the situation returned to normal within minutes.

In Algiers, the streets were taken by the crowd of fans, with horns, youyous, vuvuzelas and explosions of fireworks zebraging the sky without interruption, and with the lights of smoke that lit the night red. Even the many scooters ridden by the young Algerians had difficulty finding their way through the compact crowd, where many Algerian flags were waving.

Previous Article How to satisfy those tourists in need of sensation... July 18th, 2019
Next Article Why do couples fight during the heat wave... July 23rd, 2019