Tui CEO Fritz Joussen has just written a letter in his own hand to thank « all the support » he has received from the group’s employees, partners and the German government authorities. « TUI will be ready when the crisis is over, » he says, acknowledging that the messages of encouragement he has received over the past few days « mean a lot to me ».

The boss emphasizes that « personally, I’m good, positive and optimistic ». He also acknowledges that running a business at a time like this «  is really a challenge » and stresses that he « lutte » to achieve and contribute to the success of what is now the leading tourism group in Europe. « Stay healthy, stay healthy, stay healthy, » the letter concludes. 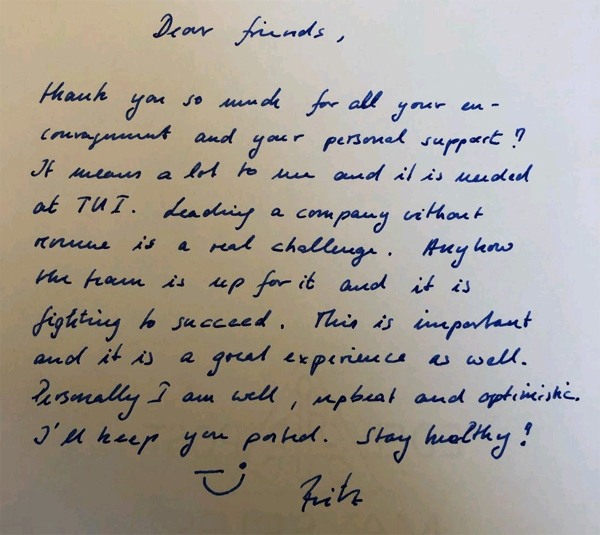 Joussen wrote this letter after the German government approved a historic rescue of his company. It gave the go-ahead for a €1.8 billion loan from the KfW (Kreditanstalt für Wiederaufbau), an amount that will be used to increase the tourism group’s existing credit line with its banks to a value of €1.75 billion.

Joussen stresses that « the commitment of the KfW loan is an important first step for TUI to successfully overcome this exceptional situation ».

The group executive, which thanks « the German Federal Government, the parliament, the government of Lower Saxony and KfW », emphasises that « TUI is a very healthy company ».