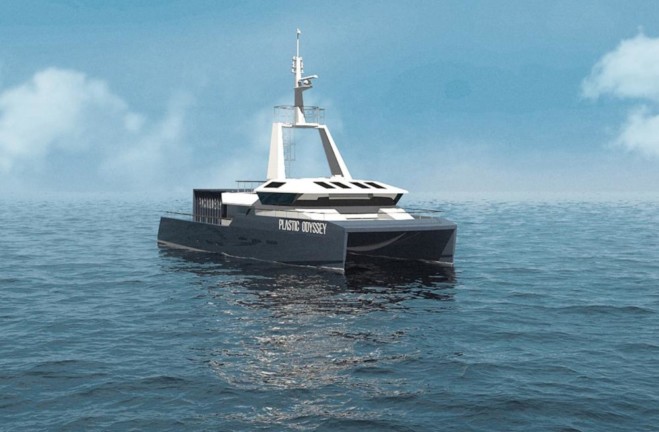 « Plastic Odyssey wants to make plastic that pollutes our oceans, a fuel for boats! Yeah, you read that right. This is the audacious bet of this team that is already preparing to travel around the world in 2020 to demonstrate the full potential of this waste. An original and daring idea for an adventure we’re not about to miss!

A BOAT THAT’S BEEN WASTED ON PLASTIC WASTE!
How does a boat that uses plastic carbide work? As the team explained in Le Monde, « we grind plastics into 5 mm flakes. The plastics are then heated to 420°C in a first tank which breaks the molecules and allows them to evaporate. Then comes distillation.

With approximately 4 to 5 kg of plastic waste treated per hour, their pyrolyzer prototype produces 3 litres of fuel.

You should know that this system already exists in the industry in some countries but the team wants to revolutionize its use. » Instead of having a factory of several hectares, our pyrolyser will be the size of a transportable maritime container. And instead of 1 million euros, it will take about ten thousand to buy it, » explains Bob Vrignaud. A MOTIVATED AND MOTIVATING TEAM
At the heart of Plastic Odyssey is a fine team. Scientists, support committees, volunteers and explorers have worked hand in hand to achieve such a project. The young explorers, Simon Bernard, Alexandre Dechelotte, Benjamin de Molliens and Bob Vrignaud, are at the origin of this large-scale project.

The construction of the first boat of the team, the « demonstrator » boat, began in March 2018 and last June, after long months of work, it was finally launched for a promotional tour of several months. For yes, the ship launched a few months ago is only the first step in an adventure that promises beautiful things.

This promotional tour will make it possible to test the life-size technologies implemented on the boat, to promote their invention, but also to attract sponsors to finance the continuation of a project that promises beautiful things.

« PLASTIC ODYSSEY »: AN ADVENTURE AROUND THE WORLD
« Plastic Odyssey is not just a committed team and an incredible boat, it’s an adventure! An adventure around the world for 3 years. But for this, the team of explorers will no longer be satisfied with their demonstrator boat but with a 25-meter catamaran, the final piece for an epic odyssey. The boat will leave from 2020 on the waters along the coasts of Africa, Latin America and Asia-Pacific.

In total, the vessel is expected to make 33 major calls for a voyage that is expected to extend over 74,000 kilometres (or 40,000 nautical miles). To ensure total autonomy for the ship, « waste will be collected ashore at each port of call and then sorted on board. Non-recyclable plastic will be converted into fuel to power the ship’s engines, » they say on their website. This expedition aims to « demonstrate the value of plastic waste by using it directly as a resource » both as fuel and to make new objects, they explain on their site. Another essential objective is « to better understand the impact of plastic pollution on local populations and define potential solutions together ».

Finally, the project also aims to develop and test new technologies both at sea and on land, or even simply democratize their use by making them more affordable, in other words low-tech recycling solutions. As Alexandre Dechelotte, co-founder of Plastic Odyssey, explained to the newspaper Le Monde, a mission around the world that, in addition to making the world aware of current ecological issues, intends to « begin the transition ».

Moreover, as Simon Bernard explains, « All our machines will be open source, meaning that anyone can copy us. We want to demonstrate that this model is economically viable. In the long run, I am convinced that this will be the norm. Our economy will gradually shift from a model based on competition and competitiveness to one based on cooperation. « A beautiful vision of our future!

« Plastic Odyssey » is more than a brilliant idea, it is a first step towards a truly sustainable and environmentally friendly society. If you too have been inspired by this project, don’t hesitate to take a look at their website and why not contribute to your scale to make things happen. 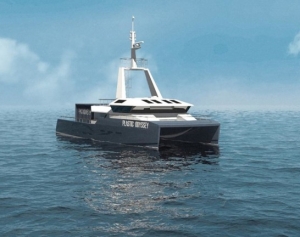