Fires in the Amazon forest, what consequences for tourism ?

This time, social networks were useful in expressing outrage at an unprecedented ecological disaster. Much of the Amazon is in Brazil and its current far-right president has decided to please large farmers and mining companies.

The Amazon: the second largest forest in the world!

The Amazon is a natural region of South America with an area of nearly 7 million km². The Amazon is the second largest forest in the world, behind the taiga and one of the wettest regions on the planet, resulting in a high level of biodiversity.

The Amazon produces 15% of the water in rivers and slows down climate change by absorbing CO2. Not to mention the wealth of plant and animal species. It contains 10% of all the species in the world. It is the last refuge of the jaguar, harpies and giant otters.

The indigenous peoples had already announced the disaster

The chief Raoni whose Kayapo people were worried about deforestation since the late 1970s is best known. However, it was only after his meeting with the singer Sting, who visited him in Xingu in 1987, that he achieved international fame.

The interest of the media makes it a natural flagship of the struggle to preserve the Amazonian forest, which is seriously endangered by uncontrolled deforestation, the advance of soya crops and hydroelectric dams.

Men have been responsible for these fires for weeks

For nearly three weeks now, the Amazonian forest has been on fire. This is not an isolated event: according to the Brazilian National Space Research Institute, satellites detected more than 74,000 fires in 2019, an increase of more than 100% compared to last year.

Amazon Watch non-profit organization’s program director Christian Poirier said: » The vast majority of these fires in the Amazon forest are man-made« . These areas will be used for cattle breeding and agriculture!

Consequences for the rest of the world

More than 20% of the planet’s oxygen comes from the Amazon, often called the « world lung« . Burning the Amazon not only prevents the Amazon forest from absorbing carbon dioxide and producing oxygen, it releases carbon that the burning forest has been storing for decades. This time, we are directly concerned and the states are really starting to mobilize.

When the (far-right) president publicly described the satellite data as « lies », the respected head of Brazil’s National Space Research Institute, Ricardo Galvão, defended his team’s research and was fired a few days later.

President Bolsonaro (photo opposite) even indicated that Ricardo Galvão was working for an international NGO. It is a familiar speech in the nationalist rhetoric of his campaign. He said that foreigners are seeking to curb the country’s development by criticizing Brazil’s environmental policy. 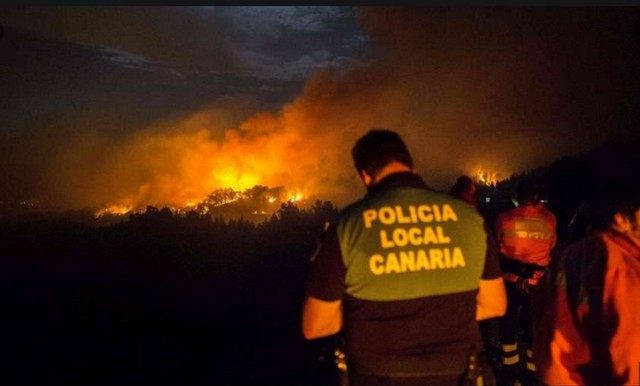 However, to complete this ugly picture, the Brazilian president never hid behind his desire to make the Amazon an El Dorado for agricultural and mining investors, to the detriment of indigenous peoples and the environment.

Fires also in Siberia and the Gran Canaria

Although fires in the Amazon rainforest are alarming, they are not the only ones that ignite vast tracts of land. Huge forest fires have burned in Siberia.

The spotlight has turned to the island of Gran Canaria. The fire spared residential areas and tourist highlights, but spread to Tamadaba Natural Park, home to some of the island’s oldest pine forests.